Mildred Blakey patented about 18 inventions between 1867 and 1905 from, mainly, Pennsylvania addresses but also Ohio. They were mostly on metal tubing and gas powered engines. Clearly, Blakey was quite prolific.

Autumn Stanley on page 343 of her “Mothers and daughters of invention”, published in 1993, acknowledges Mildred as being male. She had listed her on page 137 of “Women, aging and ageism”, 1990, edited by Evelyn Rosenthal, in an earlier version of the table, in a table of prolific woman inventors. I certainly would have assumed that Mildred was a woman although the reference to “himself” in e.g. his US134349, if spotted, might have given reason to pause.

I’ve just noticed, also, that at the bottom right of the patent page given below we are told that the attorney, Christy, is “his atty.”, not “her atty.” That was luck. Admittedly, Helen Blanchard’s US496929 says on the initial page “her attorneys” — I wonder if anyone has investigated this niche area ? How common was it for the gender to be stated ? 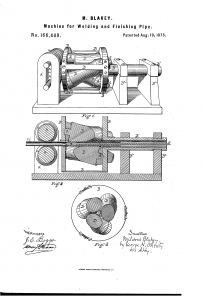 It would be an awful job if every “woman” with more than a few patents had to be investigated in the census to see if he/she was listed as male or female. In this case, the census returns do state that Mildred was a man, who married twice, and had at least five children. They also state that he was born in England in 1842 and immigrated in 1860 (fas stated for instance in the 1900 census for Ashtabula county, Ohio). By the 1880 census he had become manager of a tube mill in Etna, PA.

Mildred Blakey is a rare name to put it mildly and the only candidate who fits seems to be in the April 1861 census for Leeds, Yorkshire, aged 19, born in Bradford, and a model maker. He was a boarder in a public house.

Bradford parish church records the baptism on the 20 October 1841 of Mildred Blakey, son to Jobson, wool comber, and Mary Ann Blakey, of Bowling Lane He had been born 22 September 1841. A wool comber was someone who prepared wool to be spun — Mildred did well in those days to rise from his humble origins.

I have already posted on Bernice Noyes who also might appear to be a woman but who proved to be a man.